REVIEW: A revelation about human rights and the ‘war on terror’

Review of The Great War for Civilisation: The Conquest of the Middle East, by Robert Fisk

Review of The Great War for Civilisation: The Conquest of the Middle East, by Robert Fisk

Since 9/11 and the US-led invasion of Afghanistan and Iraq, British journalist Robert Fisk has built a huge following as a staunch critic of George W. Bush’s ‘war on terror’. But Fisk’s cogent—often controversial—analysis of American foreign policy and Western meddling and mendacity in the Middle East is nothing new: based in Beirut, he has reported for 30 years on conflicts from Algeria to Afghanistan. 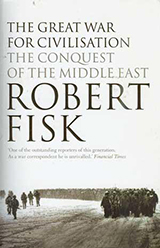