WHEN MIKA Vuidravuwalu was asked why he enlisted in the British Army in 1961, he replied: ‘Experience, put on the British Army uniform, and fight for the red, white and blue.’ He added that his brother had served with Fijian forces against the Japanese in the Solomons. Vuidravuwaluwa was one of 212 Fijians who eagerly signed up when the British Army, short of soldiers and specialists, sought recruits from the colonies. 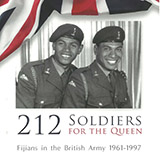