Representations of Islam and Muslims in New Zealand media

In the global media scene, media ownership is controlled by groups with political agendas. Intolerance of ‘the other’, from Islam and migrants to people of colour, show the rise of fundamentally prejudiced groups who relate well to negative media representations of ‘the other’, further fuelling financial support for dominant public voices, at the expense of those silenced by discrimination. Media studies on Islam show negative portrayals in Western media which neglect the Muslim voice. Some reasons include news culture, lack of knowledge about Islam and unawareness of the consequences from such narratives. This article identifies the growing trend of stories in the New Zealand media relating to ‘Islamic terrorism’ and critically analyses a random sampling of five news articles between 2014 and 2016 in terms of the negative, positive and ambivalent news content, both in their use of the written text and visual representations of Islam and Muslims. The tendency to use negative framing is evident with the absence or manipulation of the Muslim voice. Using the Islamic perspective of dialogue and persuasion, the theory of Ta’will, and socio-political rationale, the effects of and motivations for the written and visual news content are discussed. A case is made for a greater understanding of the textual and visual elements and more ethical reporting through intercultural engagement.

Khairiah A Rahman is Senior Lecturer at the School of Communication Studies, AUT University in Auckland, New Zealand where she lectures in intercultural communication and public relations. She is the New Zealand representative and Secretary for Media Education for the Asian Congress for Media and Communication. She is also on the advisory board of the Pacific Media Centre at AUT University. Khairiah has written articles, book chapters and presented on transnational identities, crisis miscommunication, intercultural trust relationships, Islamic perspective of dialogue and persuasion and the impact of media on culture. She has worked in both the private and public sectors with specialisations in education, media and communication. Her research interests include intercultural communication, media representations and Islamic communication paradigms.

Azadeh Emadi is a lecturer in Screen Production (Theatre, Film and Television Studies) at the School of Culture and Creative Arts at University of Glasgow, United Kingdom. As a researcher and a video maker, Azadeh is deeply invested in interdisciplinary and intercultural approaches that cross over diverse cultural forms of knowledge and digital media arts. The underlying focus of her research is to investigate new ways of seeing by applying historical Persian concepts and arts within contemporary Western schools of thought and moving image. Her research outputs are aimed at both the academic and public audience, through paper publications and presentations, as well as video screenings and exhibitions (national and international). 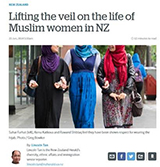