Fires burned across Aotearoa New Zealand’s Parliament grounds, and violent clashes broke out between protesters and police on the day the law enforcement officers moved to quell a 23-day anti-vaccination mandate siege of the House in February-March 2022 in scenes rarely witnessed in this country.  The riot climaxed a mounting campaign  of disinformation and hate speech on social media fuelled by conspiracy theorist New Zealand activist media such as Counterspin, which emulated their counterparts in the United States. Vitriolic death threats against political leaders and attacks on journalists and the media on an unprecedented scale were a feature of the protests. Anti-government messages were imported alongside white supremacist ideologies. Researchers have described the events as a ‘tectonic shift’ that will have a significant and lasting impact on Aotearoa New Zealand’s democratic institutions This article introduces three perspectives about the protests and disinformation ecology framed in the journal’s reflexive series Frontline. 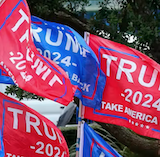