Review of The 2006 Military Takeover in Fiji: A coup to end all coups?, edited by Jon Fraenkel, Stewart Firth and Brij V. Lal

The first premier of the People’s Republic of China, Zhou Enlai (1949-1976), when asked about the impact of the late eighteenth century French Revolution, supposedly responded that it was too early to tell. Apocryphal or not, his ‘long view’ always needs to be borne in mind when trying to evaluate recent events, including the 2006 coup in Fiji. In the meantime however, ‘short views’ will continue to be made and this collection of essays by 24 contributors forms part of that process.

The 2006 Military Takeover in Fiji essays are also partisan, seking to affect what occurs in Fiji. The collection is framed largely around the spurious premise that there are only two defensible positions, either for or against the current military regime. 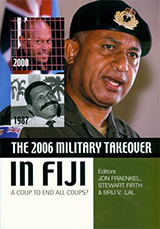