A new Asia Pacific nonprofit group has taken up the role of publishing the independent Pacific Journalism Review and other research and publication ventures.

The launch of the Asia Pacific Media Network | Te Koakoa Inc. (APMN) has ensured the viability of the New Zealand-based 28-year-old journal that was founded at the University of Papua New Guinea in 1994.

The journal has a focus on Asia Pacific, Australian and New Zealand media research but also publishes widely on global issues.

Chair Dr Heather Devere says the members of the network — mostly in Australia, Fiji and New Zealand — aim to “show support and work for the benefit of First Nations and other communities in Aotearoa and the Asia-Pacific region”.

But, adds Dr Devere, an author and retired director of research practice at the National Centre for Peace and Conflict Studies (NCPACS): “The first and most urgent aim is to enable the continued publication of the nonprofit media research journal Pacific Journalism Review”. 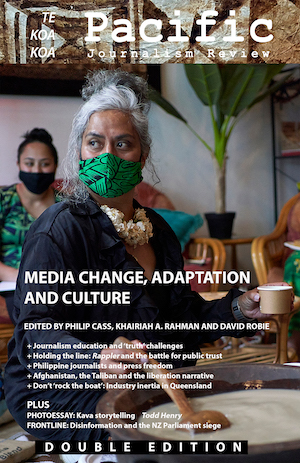 The journal has already produced two double editions since becoming independent of its last host, Auckland University of Technology, which had followed the University of the South Pacific as publisher.

Professor David Robie, founding editor of the journal and who retired as AUT’s Pacific Media Centre (PMC) director in 2020, says he is “delighted” with this development and thanked colleagues for their support for the vision.

After organising the establishment of the APMN, he is now deputy chair and is looking for new projects. Dr Robie is also country representative of the Manila-based Asian Media Information and Communication Centre (AMIC) and looks to strengthen the Asian aspects of APMN’s research.

Dr Philip Cass, who succeeded Dr Robie as PJR editor, says APMN is intended to provide a focal point for academics and practitioners with a strong interest in the region and “a desire to use their expertise to contribute to the Pacific media through publications and hands-on projects”.

PJR is the only journal covering media, communication and journalism issues in the Pacific, he adds.

“It draws on the experiences and knowledge of educators, journalists, film-makers and photographers from across the region to provide a unique insight and analysis into a range of issues.”

Need for network ‘urgent’
Dr Devere says it was urgent to establish such a network “to continue the work on Aotearoa New Zealand’s role in the Asia Pacific region following the demise of the Pacific Media Centre at AUT”.

There is no longer a space for those working on the PJR, a journal that has been publishing research related to important and on-going issues in New Zealand’s immediate region.

Dr Devere says no New Zealand university is doing the work being done by APMN.

“While there is a current focus on Pacific issues, there is no stable space for those working on media issues in the Asia Pacific region,” she says.

“There is also a conflict of interest between universities that are now functioning as commercial institutions, and investigative journalism that is engaged in providing accurate and reliable information for citizens.”