If you visit the headquarters of the newspaper Le Monde in Paris, on the wall facing you in the main hall after you’ve passed security you’ll find, side-by-side, the large reproductions of two covers of the daily newspaper which has been for decades the hallmark of the French intelligentsia. Testimonies of passed times, nearly three decades separate the one on the right side of the wall, ‘Marshal Stalin has died’ (March, 1953) from the one on the left, ‘The Rainbow Warrior would have been sunk by a third team of French military’ (September, 1985). Why did someone choose to juxtapose two stories that bear no relation? Maybe it is because both events marked a new point of departure in the psyche of the Parisian Left: Stalin’s death opened the key to the Soviet Pandora's box, and the sinking of the Rainbow Warrior 30 years ago by a French secret service squad in Auckland harbour to prevent Greenpeace from protesting against nuclear weapons testing in French Polynesia is now seen as the most grotesque illustration of François Mitterrand’s presidency (1982-1995) renunciation of his Socialist Party’s stated values. 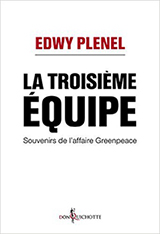