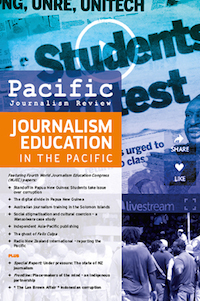 Student protests at the University of Papua New Guinea that led to police opening fire on a peaceful crowd last year, Australian journalism training in the Solomon Islands, “cyberbullying” in Fiji, independent campus media, and Radio New Zealand International’s reporting of the Pacific are among research topics featured in the latest edition of Pacific Journalism Review.

The journal was published online today on the new Tuwhera research platform at Auckland University of Technology with a special edition on journalism education in the Pacific.

The University of Auckland’s Associate Professor Toeolesulusulu Damon Salesa, who opened the JERAA-PMC preconference, says in the editorial journalism is central to the public interest in the Pacific.

Dr Salesa, director of the new institute, says journalism protects culture and especially language. However, a fast-changing world is “making it difficult for journalists to keep up with the scale of some of the issues affecting the Pacific” – such as climate change.

The editorial also features his comments about the challenges to journalism educators.

Managing editor Professor David Robie, on sabbatical last year, offers an analysis of the transformation of Pacific Scoop into Asia Pacific Report, the campus-based digital publication with the widest reach in the region.

Dr Matt Mollgaard examines the role of Radio New Zealand International as a source of information and a tool for “soft power” in the region.

PJR also features a major research report on the state of New Zealand journalism, conducted as part of the Worlds of Journalism Study; a Frontline “journalism as research” report on indigenous collaboration in Western Australia; capstone units; a NZ mayoral celebrity scandal; and covering police corruption in Indonesia.

Other WJEC Asia-Pacific papers will be published in two future editions of PJR later this year.