Pacific media freedom has been under siege for more than a decade, particularly since an attempted coup in Fiji in May 2000, when a television station was attacked and ransacked, a foreign journalist was shot and wounded and a local journalist ended up being imprisoned for treason. Since then various Pacific countries, notably Fiji, Papua New Guinea, Tonga and Vanuatu have faced various periods of media repression. Since the military coup in December 2006, Fiji has faced arguably its worst sustained pressure on the media since the original two Rabuka coups in 1987. The Bainimarama regime in June 2010 imposed a Media Industry Development Decree that enforced draconian curbs on journalists and restrictive controls on foreign ownership of the press. This consolidated systematic state censorship of news organisations that had been imposed in April 2009 with the Public Emergency Regulations that have been rolled over on a monthly basis ever since. Promised relaxation of state censorship after the imposition of the Decree never eventuated. This research monograph covers the period 1 July 2010-30 June 2011 and examines the trends in the Pacific region. In addition to Pacific Islands Forum member nations, it covers the French Pacific territories and the former Indonesian colony of East Timor and current twin provinces known collectively as West Papua. 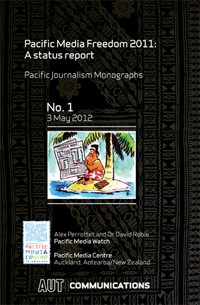 Authors submitting articles for publication warrant that the work is not an infringement of any existing copyright and will indemnify the publisher against any breach of such warranty. By publishing in Pacific Journalism Monographs, the author(s) agree to the dissemination of their work through Pacific Journalism Review and on the PJR databases.

By publishing in Pacific Journalism Monographs, the authors grant the Journal a Creative Commons nonexclusive worldwide license for electronic dissemination of the article via the internet, and, a nonexclusive right to license others to reproduce, republish, transmit, and distribute the content of the journal. The authors grant the Journal the right to transfer content (without changing it), to any medium or format necessary for the purpose of preservation.

Authors agree that the Journal will not be liable for any damages, costs, or losses whatsoever arising in any circumstances from its services, including damages arising from the breakdown of technology and difficulties with access. 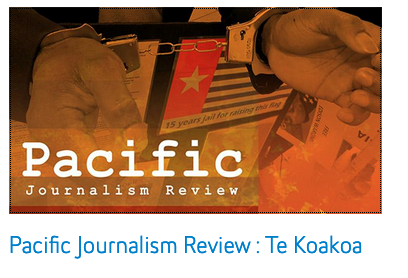