The recent development and implementation of multi-directional mobile social media in Post-industrial societies has dissolved the ontological binary opposition between film producers and audiences.  In this context, cinematic narrative as an art form needs to be re-appraised.  The convention is to study the form as a linear method of one-way communication, and an audio-visual semiotic system derived from Linguistics.

This paper is an introduction to Quantum Filmmaking, a new interdisciplinary participatory art practice composed by Kino-Present and Now&Here=Everywhere.  It provides a framework to analyse the Physics of cinematic narrative.  That is, understanding narrative as an artistic process of producing and receiving participatory video-collages created with camera-phones.  It also draws attention to transformations in reality generated during the ON/OFF line cause and effect chain.

This article develops an interdisciplinary theory of Quantum Film, merging subatomic Physics with Expanded Cinema theories.  It explores the under-researched influence of developments in Quantum Physics during the evolution of American avant-gardes in the 1960s and the ontology of Expanded Cinema.  A synthesis of the two is emergent through the practice of Quantum Filmmaking as participatory video-collage produced through mobile social media.

Iceberg Fernandez is an artist filmmaker, researcher, and independent curator born in Bilbao (Spain) and based in London. During the last decade, she has been exploring participatory art and the specificity of different media, such as hand-processed 16 mm celluloid, Internet video-conferencing. and mobile technologies.  In other words, the two ends of the history of the moving image. Currently, she is undertaking a practice-based PhD at Central Saint Martins, University of the Arts London (UK).

Connect with Iceberg on Academia.edu or LinkedIn. 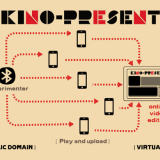