PROFESSOR ROBERT I. WEBB’S CONTRIBUTIONS TO THE FIELD OF DERIVATIVES

It is a great pleasure to publish this special issue dedicated to Professor Robert I. Webb for his outstanding contributions to academia. Professor Web, the Paul Tudor Jones II Research Professor at the McIntire School of Commerce at the University of Virginia in Charlottesville was the Editor-in-Chief of the Journal of Futures Markets for 24 years, from 1997 to 2021. Through his efforts as an Editor, he has shaped and influenced derivatives research around the globe, lifting standards, indicating research directions, and engaging with derivative communities worldwide. To recognize the contributions of Prof. Webb, we have solicited papers from various editorial board members of the Journal of Futures Markets that make up this special issue.

Alireza Tourani-Rad is a professor of finance and currently is the Deputy Dean at the Faculty of Business, Economics and Law. He holds BSc, from School of Planning and Computer Applications, Iran, MBA from Catholic University of Leuven, Belgium, and PhD from Free University of Brussels, Belgium. He joined AUT in 2004 as the foundation professor of finance, and prior to that he held professorial positions at the University of Waikato (New Zealand), Maastricht University (the Netherlands) and University of Liege (Belgium). Professor Tourani-Rad’s research interests lie in the areas of corporate finance and governance, financial markets and commodities, international finance and investments, and fund performance He has in excess of 300 research outputs. He has published more than 120 refereed articles in international journals, majority of them in A*/A ranked journals based on the ABDC- journal ranking list. In addition, he has published numerous book chapters, professional articles, and co-edited a major book "Emerging Issues in Corporate Governance” published by the World Scientific, Singapore. The quality of Professor Tourani-Rad’s work has been recognised nationally and internationally with more than 20 best paper awards at various conferences. He is the co-founder and managing co-editor of Applied Financial Letters (B-ranked). He currently sits on the editorial broad of a number of impactful international journals, including Journal of Futures Markets, Global Finance, Multinational Finance, International Journal of Accounting and Finance, Australasian Journal of Finance, Journal of Risk and Financial Management, International Journal of Behvioural Accounting and Finance. He has acted multiple times as a guest editor of highly ranked finance journals, such as Pacific Basin Finance Journal, Global Finance and Journal of Empirical Finance. Professor Tourani-Rad, as a member of research teams, has obtained a number of grants from prestigious organisations such as the Millstein Centre for Corporate Governance and Performance at Yale University, the Chicago Mercantile Exchange, the Czech Science Foundation, and the Foundation for Research, Science &Technology of New Zealand. Professor Tourani-Rad is an invited fellow and member of several academic and professional organisations, including: Fellow, Charted Public Accountants (CPA), Australia, 2011 - present Fellow, Financial Services Institute of Australasia (FINSIA), 2006 - present Senior Fellow, Auckland Centre for Financial Research, 2015 - present CFIP, Certified Finance and Investment Professional, Institute of Finance Professionals NZ (INFINZ), 2012 - present Director, Global Association of Risk Professional (GARP), 2004 - 2012 Research Affiliate, European Centre for Corporate Engagement, 2011 - 2019 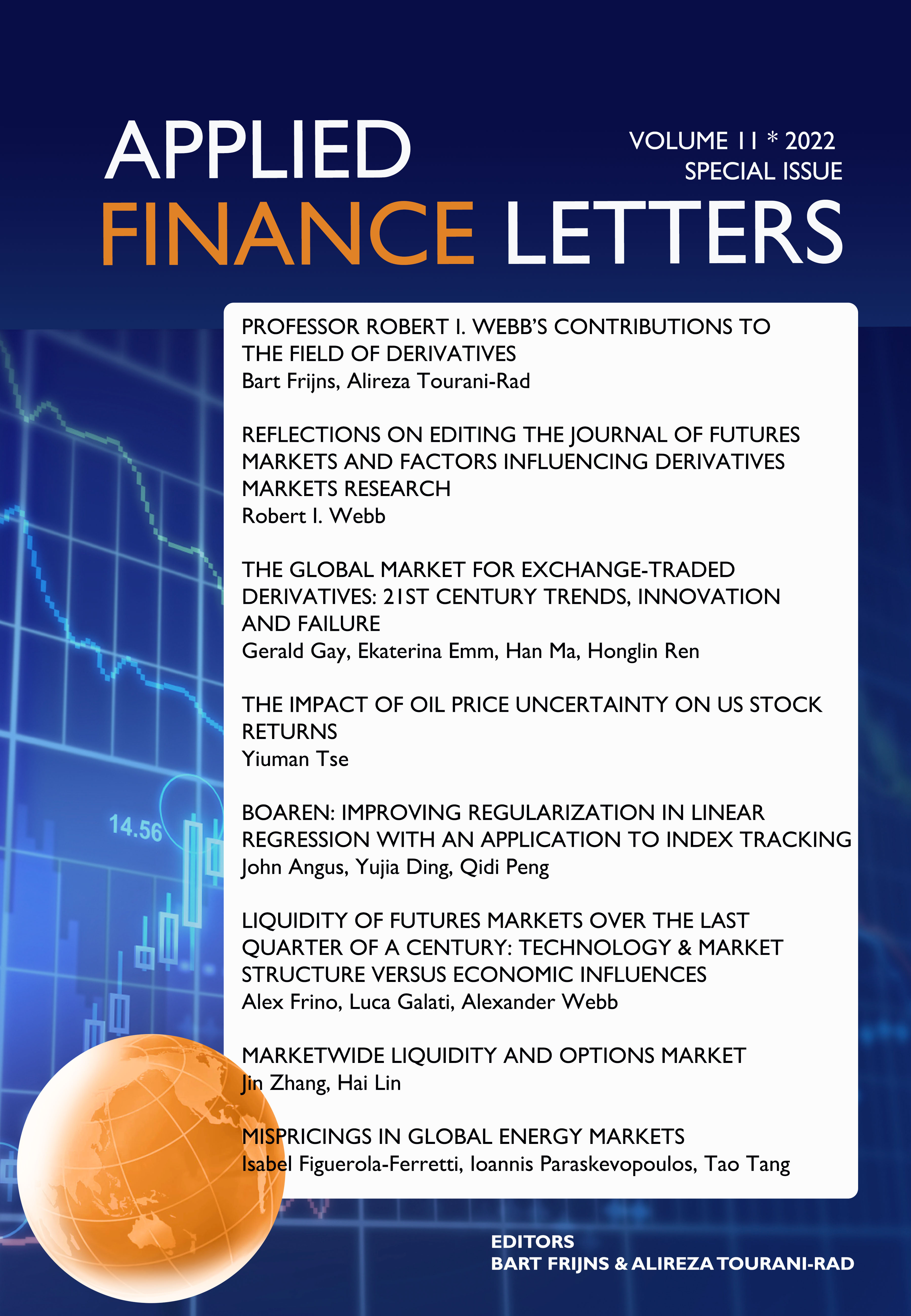 By publishing in Applied Finance Letters, the authors grant the Journal a Creative Commons nonexclusive worldwide license (CC-BY-NC-ND: Creative Commons Attribution-NonCommercial-NoDerivatives 4.0 International License) for electronic dissemination of the article via the Internet, and, a nonexclusive right to license others to reproduce, republish, transmit, and distribute the content of the journal. The authors grant the Journal the right to transfer content (without changing it), to any medium or format necessary for the purpose of preservation.

Authors agree that the Journal will not be liable for any damages, costs, or losses whatsoever arising in any circumstances from its services, including damages arising from the breakdown of technology and difficulties with access.

Published by the Auckland Centre for Financial Research.